Cardano is in line with the general sentiment within the crypto market, recording a slight recovery between August 12 and 14. This was before pulling out of today’s intraday trading session. ADA could benefit if Bitcoin and other major cryptocurrencies correct the bearish momentum.

Vasil is an upgrade aimed at increasing the scalability of the Cardano blockchain. Developers want it to help transmit transaction data cheaply. Vasil was successfully launched on Cardano’s testnet in early July. Even so, the developers of the project identified more technical bugs. The discovery forced them to adjust the launch date to the mainnet, contrary to the planned rollout in August.

The Vasil hard fork is Cardano’s biggest upgrade since the September 2021 Alonzo hard fork. The expected fork comes as a “game changer” in Cardano’s development. It is positioned to improve the network in terms of speed and scalability. With this upgrade, Cardano will become a better ground for smart contracts and decentralized applications (Dapps).

The Vasil hard fork was originally scheduled to launch in June. However, Cardano’s blockchain development teams have prioritized a smooth network transition. Following the failed launch in June, the Cardano Vasil hard fork was again delayed in July, with the Cardano blockchain development team targeting a seamless network upgrade.

The organization in charge of research and development of Cardano, Input Output Global (IOG), released a YouTube update on Vasil’s planned hard fork last month. According to IOG technical lead Kevin Hammond, the Vasil hard fork would be postponed to ensure that all stakeholders, including exchanges and API developers, are “ready for it”.

According to a blog post titled “Cardano Upgrade Approaching Vasil: What to Expect,” IOHK explained all the features and improvements that will come with the hard fork.

The upgrade will significantly improve Cardano’s performance and capabilities in line with network improvements.

Quoting the IOT maintainer, “Obviously from where we are, there could be a few more weeks before we go to the hard fork of Vasil. This is extremely important. All users should be ready to progress in the hard fork to ensure a smooth process.

The hard fork paves the way for Cardano sidechain interoperability. Interoperability is one of the most crucial things platform developers are looking to deploy in the current era of Basho as a short-term workaround. They intend to actively develop the block size to ensure the operability of the network.

According to Cardano developer Input Output, three indicators will determine when the mainnet hard fork launch will take place. According to the developer, 75% of the mainnet blocks must first be created by the final candidate of the Vasil node. After that, around 25 exchanges that draw most of the available liquidity need to be onboarded before the upgrade happens.

The last step involves upgrading the main Cardano-based decentralized applications (Dapps) to Node version 1.35.3. Minswap, before the mainnet upgrade, will be triggered.

For the week ending August 14, the total cryptocurrency market capitalization is on target for a sixth consecutive weekly rise. The recovery could support a second consecutive monthly increase. Cardano is among the coins to watch this week.

Cardano’s price analysis shows a sign of a sideways trend today after the previous session’s gains. Currently, the bulls are facing a challenge at $0.572 (white). A successful breach of the critical resistance level would pave the way for another advance in the token. The bulls continue to target the reverse head and shoulders pattern towards $0.60 (blue).

Following the broader market, the price of ADA fell to a low of $0.497 on August 10 before reaching a high of $0.5859 on Sunday August 14. While identifying support from the latest US economic indications, the network updates were also supportive of the ADA. News of progress towards Vasil’s delayed hard fork provided ADA support.

Technical indicators and the daily candlestick chart (below) showed a bullish signal. ADA sits above the 50-day MA, currently trading at $0.552. The 50-day EMA pulled back from the 100-day EMA, the 100-day EMA moving away from the 200-day EMA, both bullish ADA price signals. 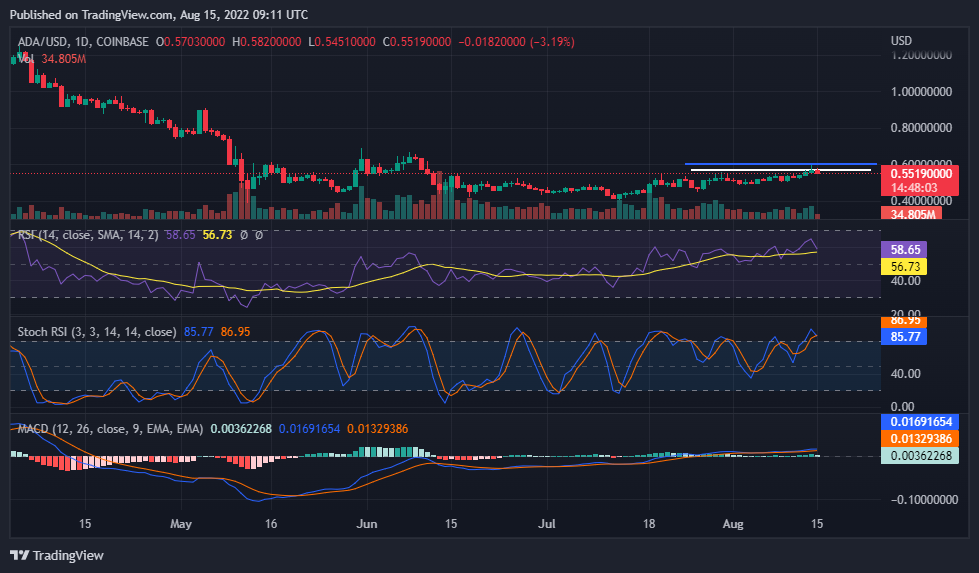 Cardano (ADA) reverses XRP as the 6e The biggest crypto.

Cardano’s native token, ADA, overtook XRP on Sunday, August 14, securing its 6 spote the largest cryptocurrency in the world by market capitalization. ADA now registers $88 million more than the market capitalization of XRP on CoinMarketCap. This comes as ADA’s trading volume increased by more than 70% over the weekend.

According to Forbes, blockchain platform Cardano wants to become “the internet of blockchains”. The ADA killer is still several million dollars away from taking the fifth spot on the list of biggest cryptos. However, the potential of this project should not be compromised.

Disclaimer: Cardano Feed is a decentralized news aggregator that allows journalists, influencers, editors, publishers, websites and community members to share news about the Cardano ecosystem. User should always do their own research and none of these articles is financial advice. The content is for informational purposes only and does not necessarily reflect our opinion.

The price is right for Royalty Pharma plc (NASDAQ:RPRX)

With a price/earnings ratio (or “P/E”) of 42x Royal Pharma plc (NASDAQ:RPRX) may be sending very bearish signals right now, given that nearly half of all companies in the US have P/E ratios below 16x and even P/Es below 9x are not not unusual. Although it is not wise to take the P/E at face […]

Meeting multiple needs within the cryptocurrency community is a way for a project to stand out from the competition and attract new users and liquidity to its ecosystem. Loopring aims to do just that by aiming to offer an EVM-based solution with low fees where DeFi and NFT developers and investors can transact. The Layer […]

Amazon (AMZN) rose sharply on Friday as shareholders and analysts applauded its second-quarter results. Analysts said AWS’s acceleration and strong overall revenue growth were the key points that fueled the price rally on Friday morning. Sounds good to me, but let’s stick to charts and indicators. In our July 18 review of AMZN, we wrote […]